Remembrance- Sma'knis - Lest We Forget

Please wear an orange shirt (or pin) on Friday, Sept. 28th to recognize all the survivors of Residential Schools and those who did not make it home. As we work towards reconciliation between Indigenous and Non Indigenous Canadians, an important step is recognizing the harm done to generations of children and their families due to the Indian Residential schools system. In our area Shubenacadie Indian Residential School was in operation from 1929- 1967. It is important for the students in our classrooms to learn about this sad part of our history and how it affects our indigenous friends and family today. There are two PowerPoints posted here for two different age groups that can be used in classrooms to educate students. A list of lesson ideas, suggestions on how to commemorate the day, as well as resources available will be emailed to each teacher. For support or further information please contact one of the ASDN First Nation Education leads. Patricia Miller patricia.miller@nbed.nb.ca or Elizabeth Price elizabeth.price@nbed.nb.ca

In collaboration with local First Nation communities, ASD-N hosted 3 Multi school Mawi’omis (Mi’kmaq word for gathering) in three locations this past week. Tuesday, May 29 at Bathurst High School with all schools in the Bathurst area attending. Thursday, May 31 was an outdoor event at the beautiful Aboriginal Heritage Garden in Eel River Bar First Nation for all the schools in the Dalhousie region. Friday, June1, the third event, was hosted by Sugarloaf Senior high and included over 1000 students from the Campbellton and Listuguj area. More commonly referred to as a Pow Wow, students at both schools had an opportunity to experience customary music and dance as well as see a display of various stages of basket making by renowned basket maker Becky Labillois. The last two events also included a performance by Indigenous rapper Tristan Grant, aka Wolf Castle from Pabineau First Nation. The Mawiomis offered an opportunity to showcase aspects of Mi’kmaq culture that was suppressed, marginalized, and even prohibited for a period of time in Canada. When the Indian Act was written in 1876 traditional celebrations and healing ceremonies were against the law. It wasn’t until the 1950s that Indigenous Peoples in Canada could practice their traditional ceremonies and celebrations such as the Pow Wow. Over the three days close to 3000 students, both indigenous and non, were able to participate in amazing events that demonstrated Mi’kmaq culture in a positive light. ReconciliACTION was the theme of these events. ASD-N continues to work hard at improving its relationship with Mi’kmaq communities and taking the 94 Calls to Action from the Truth and Reconciliation Commission seriously as well as objective 6 in our NB 10 year education plan, as we move forward together. ASD-N would like to thank all those who supported and attended the events. They were a great success! Specifically we would like to thank the following sponsors of these events, we certainly could not have done this without your generous support. Anglican Church of Canada Anglophone North School District Metallic’s Grocery Eel River Bar First Nation Dentist Brisson Arco Lumber Port of Belledune Dairy Queen Joint Economic Development Initiative (JEDI) Lemeque Fishery Cooperative Listuguj First Nation Jean Coutu (Dalhousie) Chaleur Sawmill Martin’s Grocery Village of Belledune Resitigouche Dealers Association Province of New Brunswick Pabineau First Nation Atlantic Superstore (Bathurst & Atholville) Rotary International (Bathurst & Dalhousie) Recreaplex Foodland (Dalhousie) Dalhousie Industrial Credit Union

Anglophone North School District in partnership with Pabineau First Nation, Eel River Bar (Ugpi'Ganjig) First Nation and Listuguj First Nation are hosting a Multi-School Mawi'omi in three different locations during the week of May 28th- June 1st. Each event will showcase the rich and vibrant culture of the Mi'kmaq People through a traditional Mawi'omi (Gathering) more commonly known as a Pow Wow. Over 2600 students, from Bathurst to Campbellton, will participate in this cultural celebration. The First Mawi'omi will take place at the Coronation Park behind Bathurst High School on Tuesday May 29th. The second Mawi'omi will be hosted at the Aboriginal Heritage Garden in Eel River Bar (Ugpi'Ganjig) on Thursday May 31st. The final Mawi'omi will happen on the front field of Sugarloaf Senior High on Friday, June 1st. All events will begin at 9 am. These events are open to the public so please do not be shy and feel free to drop in througout the day. If you are in the area come out and celebrate with us! A huge thank you to the planning committee and everyone who has kindly donated their time, money and material to make these amazing events a reailty.

Students from NSEE, NSER, Metepenagiag School, Natoaganeg School as well as students in grades K-5 from Blackville School had the opportunity to participate in a Mawi’omi or cultural gathering, more commonly referred to as a Powwow, in the NSER gymnasium on Thursday, April 26. The day began with...

The grade 11 & 12 students created a written piece describing their legacy project and what the dream catcher represents.

Anglophone North School District welcomed Dr. Isabelle Knockwood, author of "Out of the Depths”, which chronicles the experience of Mi'kmaq children at the Indian Residential School in Shubenacadie, Nova Scotia. Isabelle spent two days in ASD-N on March 19th and 20th. The first day saw ASD-N collaborate with Natoaganeg First Nation to host a spring social/gathering for Indian Residential School Survivors and Elders that included drumming and dancing from students of Natoaganeg School, a talk from Isabelle, and a translation activity for the Elders and Survivors. On the second day of her visit, Dr. Isabelle Knockwood worked with educators from ASD-N who participated in a book study of her book "Out of the Depths". Educators were actively engaged during this once in a lifetime opportunity that had a positive impact on all. ASD-N's First Nation Education Team would like to thank Dr. Isabelle Knockwood for sharing her knowledge and Natoaganeg First Nation for the use of their community hall and the support of their Health Centre.

In collaboration with local First Nation communities, ASD-N hosted a Mawi’omi (Mi’kmaq word for gathering) over a two-day period at MVHS and JMH, Feb 15 & 16. More commonly referred to as a Pow Wow, students at both schools had an opportunity to experience customary music and dance as well as listen to a Mi’kmaq storyteller who put on sessions throughout the two-day event. The Mawi’omi’s at Miramichi’s two local high schools offered an opportunity to showcase aspects of Mi’kmaq culture that was suppressed, marginalized, and even prohibited for a period of time in Canada. When the Indian Act was written in 1876 traditional celebrations and healing ceremonies were against the law. Although amendments to this Act would take place throughout the years it wasn’t until 1951 that Indigenous Peoples in Canada could practice their traditional ceremonies and celebrations such as the Pow Wow. In addition to JMH and MVHS, students from other surrounding schools participated in these events. A total of about 2500 students were able to participate in such amazing events that demonstrated Mi’kmaq culture in a positive light. ReconciliACTION was the theme of these events. ASD-N continues to work hard at improving its relationship with Mi’kmaq communities and taking the 94 Calls to Action from the Truth and Reconciliation Commission seriously as we forward together. ASD-N would like to thank all those who supported and attended the events. They were a great success! You can read more about the history of Pow Wow’s by consulting the following link. http://www.thecanadianencyclopedia.ca/en/article/history-of-powwows/

The superintendent for Anglophone School District North (ASD-N) in New Brunswick announced that all students in the north will have a cultural learning experience through a traditional Mawi’omi. A Mawi’omi is a cultural and social gathering for celebration of new seasons and renewal of relationships. This celebration involves drumming, singing/chanting, prayer and ceremony. The theme of this two-day Mawi’omi is ReconciliAction. ReconiliAction is termed after Reconciliation, defined as: the restoration of relations and the action of making one view or belief compatible with another. ReconiliAction is action toward repairing the damaged relationship between Indigenous and non-Indigenous peoples in Canada. To equip students with background information, Melissa Dedam and First Nation Education Team members have created two Mawi’omi PowerPoint presentations, one for middle and one for elementary. These PowerPoints are available to download here: http://asd-n.nbed.nb.ca/fne. Wela’lioq/Thank You, ASD-N First Nation Education Team 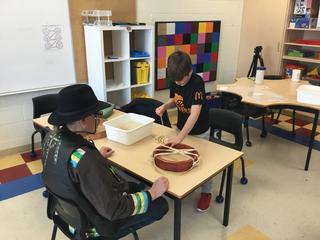